Offers advanced optimization and a health check for your data devices. 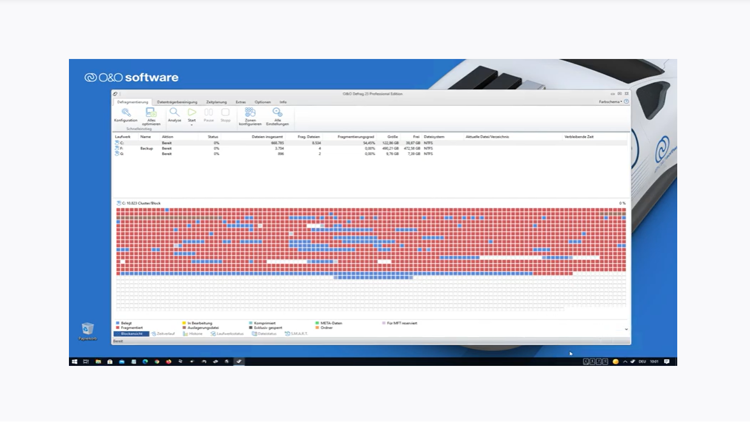 It comes with five different defragmentation methods and you can achieve good results and speed gains for every system. The program now automatically detects when a new defragmentation is necessary.

Windows already has a tool for defragmentation, so why invest in your own program? Quite simple, because it is much better and more flexible. While Windows only offers rudimentary automation, you can choose the time interval in Defrag 25 or start the defragmentation automatically as soon as the screensaver is running. You can also arrange several drives in parallel and start cleaning up while booting in order to clear out otherwise locked system files. In addition, Defrag 25 includes a Disk Cleaner, a tool that deletes unnecessary files.

Innovations of the new version 25 include:

Monitor the health of your PC with S.M.A.R.T.

The S.M.A.R.T. functionality was integrated for the first time in O&O Defrag 25. This displays the health status of hard disks, SSDs and RAIDs should problems arise. This could be a high temperature or errors reported by the drive itself. If anything is abnormal, a message will be displayed via the Windows Info Center. The functionality warns users of problems and reports imminent failure of the data carrier at an early stage.

With the new version of O&O Defrag, the read and write access of your own computer is more present. In the taskbar, users can now see which drives are currently being used for reading and writing. A search on the respective data carrier can be started by right-clicking.

In our opinion O&O Defrag is one of the best defragmentation tools on the market and is far superior to the Windows functionality that comes with it.