These tools help with questions regarding your SSD, such as "How fast is my SSD?". 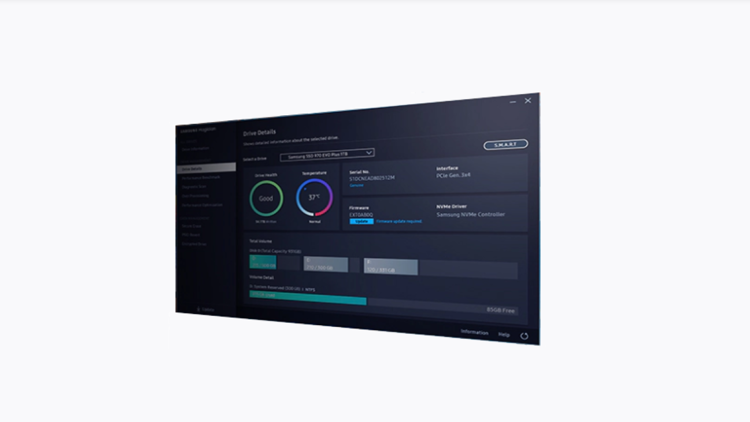 An SSD differs from a conventional hard drive in many ways. It is fast and quiet. An SSD also wants to be treated differently than a traditional HDD. For example, you do not have to defragment the flash memory - after all, there is no read and write head like in conventional disks that prefers data that are close to each other. If you use an SSD for Windows, remove defragmenters from the list of important programs. The free tool SSD Tweaker knows this and prevents automatic defragmentation under Windows. The small program also makes sure that the SSD is not 100% full and thus the performance drops.

Another special feature of an SSD is the deletion of data. Due to the SSD structure, it cannot be deleted 100%. An SSD consists of memory cells that can only be rewritten to a limited extent - according to the manufacturer, often hundreds of thousands of times. If the limit is reached, the affected cell can only be read. Overwriting with zeros to make the data illegible then no longer works. Note this before reselling and let tools like Secure Erase go over the top for the remaining cells.

A significant number of SSD tools are manufacturer specific. For example, Samsung and Intel offer their own tool packages for their SSDs to download. You should therefore take a first step to see who built your SSD. For example with the free tool CrystalDiskInfo, which delivers further values ​​of your memory. The manufacturer programs hide more than just simple information collections. For example, the Samsung SSD Magician Tool can tune Samsung SSDs, provide information about firmware updates and then help with the update.

This is an SSD diagnostics tool. SSDlife checks the functionality of your SSD and provides you with a lot of useful information about your SSD.

The small free tool SSD Tweaker should improve the use of your SSD hard drive and thus optimize the life and performance of the memory.

CrystalDiskMark is a benchmark tool that determines the performance of hard drives, USB storage devices and SSDs.

The CrystalDiskInfo tool shows all important technical data such as the temperature and health of the hard disk.

With the Intel SSD Toolbox, you can analyze your solid-state drive drives and optimize their operation by accessing the management options.

The free SSD program Samsung SSD Magician Tool is designed to keep the performance of your Samsung SSD at a high level. In addition to the diagnosis, the tool also offers the opportunity to additionally optimize your Samsung SSD.

If your SSD is no longer performing as it should and SSD tuning is no longer helping, the free Secure Erase tool could be your last resort. The small freeware deletes all your data on the SSD and resets your SSD to the factory settings.

If you want to move from your HDD to an Intel SSD, the Intel Data Migration Software can help you.

The best Microsoft Office alternatives in 2023